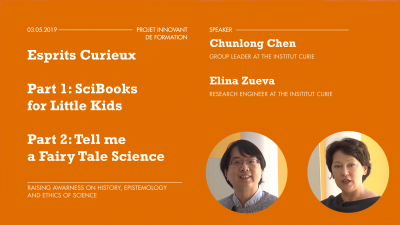 How to explain science to young children? By publishing books for two-to-six-year-old kids on scientific topics, the Actine Association, created by Olga Markova, aims to make science approachable to anyone. The project is called Esprits Curieux. The association is also involved in facilitating workshops for children and curating exhibitions for the general public on biological processes. During their lecture, Chunlong Chen and Elina Zueva share the stage to present the two books they each have written. Chen’s book is about the role of platelets in the blood while Zueva’s book tells the story of the relationship between the genome and transposons. They comment on their approach to storytelling for children by explaining their choice of topic, telling their story and showing the illustrations of each book. 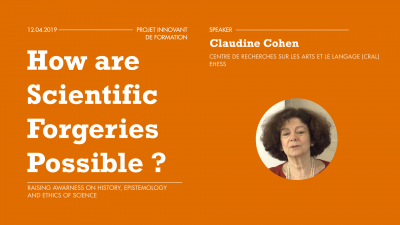 How are Scientific Forgeries Possible?

Are forgers in science betrayers of truth, or do they show how science is built? Following a brief definition of forgery, Claudine Cohen emphasizes the questions and goals she addresses in her lecture. She first approaches forgery through the lens of ethics and questions the efficiency of moralizing scientific research. She then recalls that scientific knowledge is a construction of facts, just like forgery is. She does however insist on the intentional aspect of forgery to produce false evidence and conclusions. Cohen ultimately analyses the processes and methods of historical sciences, such as archeology and paleontology, and gives examples of two famous archeological forgeries: the forgery of Moulin Quignon and the forgery of the Piltdown man. 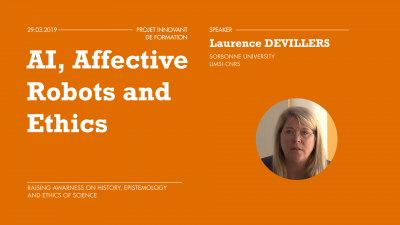 Is artificial intelligence (AI) developed according to ethical principles? After presenting herself as well as her research center, Laurence Devillers defines AI and explains how it works. She also presents the risks of the lack of women in the AI industry. She then gives a brief summary of AI historical development while focusing on the specificities of contemporary AI. To show the current limits of AI, Devillers enumerates the differences between machine intelligence and human intelligence. She insists on the fact that the ability for electronic systems to fake emotions can deceive vulnerable people. She then lists a series of ethical principles that should be respected by AI industry leaders. As a conclusion to her lecture, Devillers claims that there are no ethical machines. Ethics should come from the community of researchers and industries by building common AI tools. 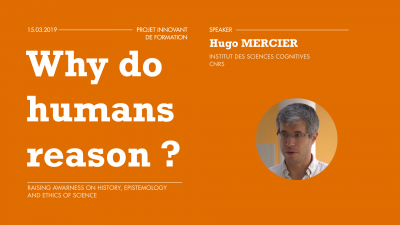 Why do humans reason?

What does reason help humans do? Hugo Mercier starts his lecture by explaining how reason differs from intuition. He then defines the theory of the individualistic view of reasoning and cites René Descartes and Daniel Kahneman as its defendants. Mercier continues by giving an example of a reasoning test to show that reason is not accurate but helps humans in social interactions. To conclude his demonstration, Mercier enumerates a series of predictions about the human ability to reason. First, reason has a myside bias. Second, it shows selective laziness. Third, it enables better evaluation of arguments. The fourth prediction is a consequence of the first three ones: people tend to evaluate arguments more accurately when in a group than alone. 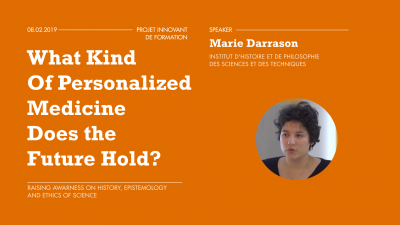 What Kind of Personalized Medicine Does the Future Hold? 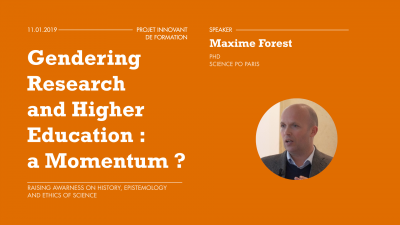 What are the gender issues in research and how can we overcome them? In his lecture, Maxime Forest starts by revealing the fundamental gender problems in science: horizontal and vertical segregation between men and women. He then explains the reasons behind these problems. The masculine image of science, gender blindness and gender bias all prevent women from performing as well as men in research. Forest continues his presentation by summarizing some European policies promoting gender equality in research. He speaks about the European Commission’s strategy behind these policies and enumerates some of their successes. He concludes by detailing the Egera experiment, a project conducted by Sciences Po Paris attempting to establish equality between men and women in academia.